skip to main | skip to sidebar

IF YOU ENJOY READING OUR ARTICLES - WHY NOT TAKE A LOOK AT OUR WEBSITE...

EROTICA 2013 - Tobacco Dock, London - Review from a fetish and burlesque point of view...!

As long standing advocates of quality fetish, Fetish Map London has had a place at Erotica for many years. However, this year saw a greater fetish presence than before. Maybe this is a sign that Erotica is crossing a new frontier, providing more different adventure into the kinky world.

Our stall was tucked into a corner in one of the rooms of the venue, and although we had great surroundings, some of the shy visitors appeared too timid to approach us. Seeing Fetish Map, big and bold, was enough for some to do a U turn. This only tells me that minds still need to be more opened to the endless  opportunities and adventure the erotic world has to offer; they need to stretch their horizon further in their quest for thrills and titillation. But those were a very few. For the majority, their wide eyed faces was proof that they were very happy to have found a new source of kinky inspiration.

"A map of all things fetish and burlesque in London? Wow, what a great idea!"
"Thanks for doing this, I hope you continue for a long time, this is amazing!"
"How long have you been going? I wish I had known about you before today, but I'm glad I've found you now!"

These are a minuscule amount of responses to the Maps from the visitors, and extremely satisfying to hear.

With London Alternative Market (LAM) organising some of the shows, the crowd was exposed to a whole new world. From fetish fashion shows to 'pony girls and boys' and bondage workshops, I do recognise that fetish is not for everybody. But the problem is that the majority of people have a mistaken view of what fetish is. As in all fields, fetish has various levels, from foot fetish, bedroom bondage and play, latex fashion, to the more hardcore sado-masochism, this world has something for everybody.
Exploring new avenues, new thrills is part of any couple's sexual life, or so it should be. We merely want them to open their mind slowly, softly, to the multitude of possibilities away from the ever monotonous high street sex shops.

We like to think that many timid visitors went away knowing that it is safe to experiment further, in the safety of their own homes, and that our Maps open the door to new places, new stimulation, and new excitement.

But fetish isn't our only pursuit or the only guide we publish. The Burlesque Map London is our other product, so we were delighted to see a major representation of this world at Erotica. To me, the main attraction was Ophelia Bitz, a famous name in burlesque, whose kinky, and somewhat risqué register shows true creativity while remaining in the realm of burlesque. Her unique style as compère adds saucy, bawdy cabaret flavour to the bland and uniform style some performers can showcase.

In conclusion, Erotica 2013 seemed to be a success among most visitors and exhibitors, who enjoyed the new venue. While others missed the feel of a big hall, the open plan venue where all is exposed overtly, and everything can be found without having to look for it.
We all know that it is impossible to please everybody, so let's give Tobacco Dock a chance, and be happy that a new venue can be explored without losing the feel of the message.

Erotica 2013 is over, let's look forward to what the next one will bring us.

TAKE A LOOK AT THE MAP - www.fetishmap.co.uk


Posted by Eva Lamour at 01:06 No comments: Links to this post


Where Oh where, in the wonderful City of Lights, can we find some kinky attire and fetish paraphernalia?
As the publishers of Fetish Map London, we are often asked for advice from kinksters travelling around Europe, in search of new avenues, and new ventures. Paris is not just about love and romance, look deeper and you'll find eroticism and kinkiness.

The bohemian, free spirited area of Beaubourg /Chatelet and Le Marais, is home to the George Pompidou Centre, amazing street entertainment, typical Parisian cafés and an amalgam of quirky shops.
As you turn the corner, leave the crowd behind, you enter a narrow street filled with quaint shops. From modern unusual art exhibitions to eccentric fashion boutiques and raunchy sexy stores, such as Metamorph'Ose, the choice is truly exquisite.

The array of clothing spans from leather outfits, pvc items to sensual lingerie. At Metamorph'Ose, they happily cater for any request for kinky or alternative wear, including uniforms and fancy dress, so, don't be scared to ask.

A whole room dedicated to shoes and boots, each pair more fabulous than the next one, with a foot slave who gratefully helps you with the fitting; you can even dig your heels onto his thighs, or let him worship your feet. A personal touch from the in-house foot fetishist is the extra added bonus of Metamorph'Ose.

So, yes, Metamorph'Ose, is a unique place for the free thinker, a place to find your most kinky desires: paddles, whips, bondage gear, all the sex toys and accessories you could imagine and more...

Venture yourself to this beautiful part of Paris and explore the streets, the cafés, the shops and discover the hidden places that will bring the naughty, kinky spirit out of you...


or just visit them at:


TAKE A LOOK AT THE MAP - www.fetishmap.co.uk 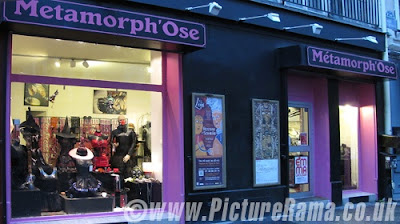 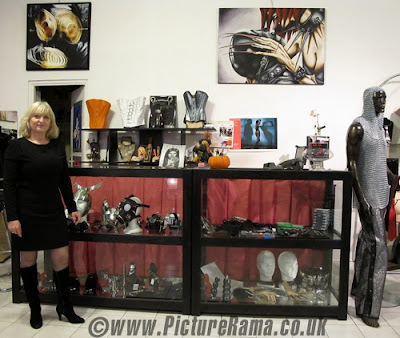 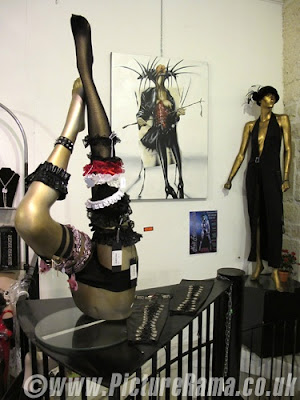 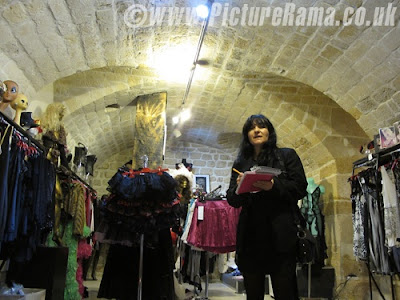 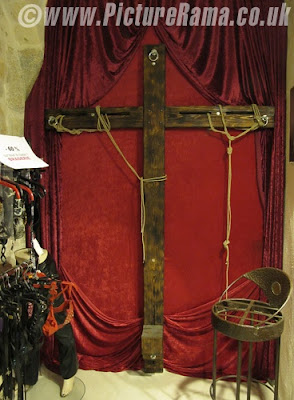 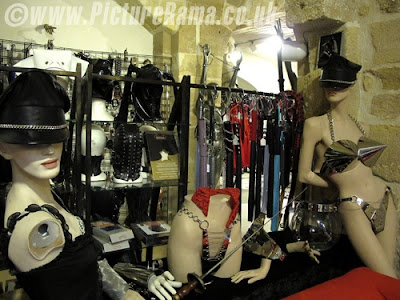 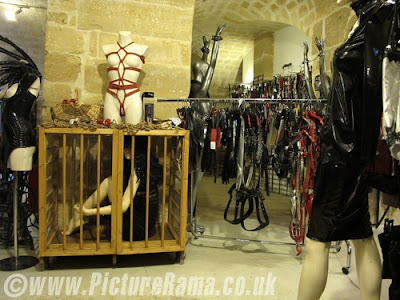 The amazing basement at Metamorph'Ose


Posted by Eva Lamour at 17:46 No comments: Links to this post